HomeBlogGetting a fresh start in...

Getting a fresh start in Montréal 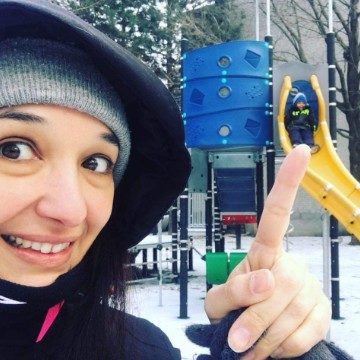 I never would have thought that heading into my forties, my neat and orderly life would take such a turn. Like many people, I felt like changing my life for the better on several occasions, but I never knew where to start and I never really had the opportunity to pursue it. When my husband suggested that we try embarking on an adventure in Canada, I didn’t think everything would happen so fast: Rafael was born May 1, 2014, my husband received his Working Holiday permit, December 2014, he was leaving for Montréal. Lastly, by April 2015, I was bidding farewell to my world in Paris and to everyone I love.

I arrived in Montréal in April 2015 with my then 11-month-old son. The main purpose of the trip was to join my husband who had left four months earlier to find a job and apartment to facilitate our arrival. I knew what I was losing by leaving Paris, the city most dear to me, but I didn’t know what to expect.

I can remember it like it was yesterday, all the feelings I had when I first landed in Montréal. I felt like I was on vacation and my visitor status must have intensified this nice feeling. Yet, I still felt lost: my Paris routine was turned upside down. However, I had no choice but to familiarize myself with this city, which seemed huge and very strange with its architecture. It was not so simple.

First, upon our arrival in April 2015, it was still very cold, I was not used to this supposedly spring weather (my clothes were not very warm). Moreover, my husband was working very hard every day and it was difficult to count on him to show us around. Lastly, a young child requires a lot of attention and in Paris I had a nanny and I was working full time. Basically, it was a radical change!

It all started with my neighbour in 903, Oskia, who was from Spain. She often went to La Fontaine Park to meet up with a group of moms who had connected on Meetup (a networking site for people who share a common interest). She was kind enough to include me in their weekly gatherings. Subsequently, I decided to sign up for the group myself and that’s when it all began.

The more we saw each other with our children, the more diverse our meetup venues became:
– Discovering new cultures (they were all from different backgrounds: Croatia, Brazil, Germany, South Africa, Spain, Russia, etc.)

– Exploring Montréal neighbourhoods (before meeting them, I only went to La Fontaine Park near my place), including Old Montréal, downtown, Outremont, Plateau Mont Royal, Little Italy, … Based on my European experience, all these different neighbourhoods felt as if I was going to a new city every time: Old Montréal has a European influence, the business district is typically North American and the rest had an identity specific to Montréal.

– New parks, like Jarry, Baldwin, Mount Royal: Montréal has so many green spaces, which I really appreciate.

– You experience the four seasons: I arrived in spring 2015, five, nearly six years ago. At that time, the first buds were appearing, which was the sign for the end of hibernation. I can tell you that starting in June, I experienced an incredible summer. Crazy heat and a pervasive sun that is totally foreign to Europeans. This usually lasts until early October. In the fall, the foliage colours are a unique beauty and make you want to get out of the city to see this magical yet short-lived phenomenon. In 2015, I was able to see the first snowflakes falling in December and a snow-covered Montréal sets a different mood. Quiet yet majestic!

You can also enjoy Montréal any season through various free activities for the whole family:
– The summer has many music festivals (the FrancoFolies, the Jazz Festival, …). There are also many free guided tours to help you discover the city from different perspectives. These tours are organized by the Quartier des spectacles. There are trade fairs, outdoor cinemas, cottage rentals, temporary beaches, …

I spent over a year and a half exploring this incredible city but our time was limited as we were dependent on our visas and various resident permits. So the question of going back to France came up when my love’s permit was about to expire. We had thought about eventually heading out to the Saguenay/Lac St-Jean region where, to this day, we still have friends as we have visited that region on many occasions. In the end, we made up our minds quickly. Only Montréal can offer the compromise of countrified calm with the excitement of a big city. We also considered the wellbeing of our son, growing up here.

After considering several avenues, the idea of resuming my studies was the best solution at the time. The criteria for that choice were money, the permit, the time required and schooling for our son. I won’t hide the fact that the procedure for obtaining my study permit was arduous and stressful, but when I saw that I was able to get the permit, I knew that a new stage in life was starting for my family and I. I was finally going to live like a real Montrealer.

January 14, 2017, the first day of school (course ending on August 21, 2019).
Here I am, living the life of a true-blue Montrealer. The differences here compared to Paris and neighbouring countries would make such a long list:

– The metro and bus are a good example. People are cheerful and in good mood when lining up, with no pushing or shoving.

– Mutual aid, which is basically synonymous with Québec. I can recall more than once where someone helped me carry the stroller with a smile and lots of kindness.

– You’re never bothered on the streets. It’s nice for a girl to be able to walk through the streets of Montréal late at night.

I really miss that great period, when I had the time to experience this city’s delights. I still appreciate Montréal just as much but my current job leaves me little time to enjoy it like I did in the beginning. Every time I leave Montréal, I’m always delighted to find myself back in MY adopted city, my new home! 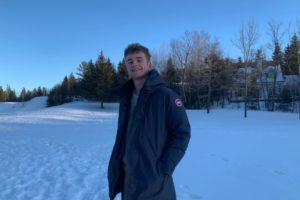 Montréal: A city with a lot to offer

Written by Imane B. 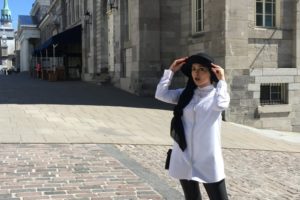 Taking advantage of opportunities in Montréal during COVID-19 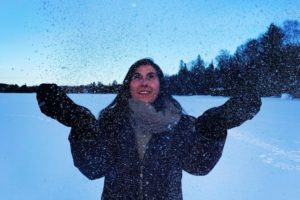 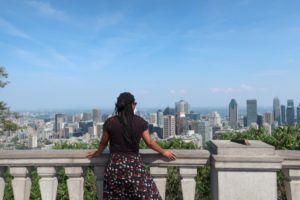